Recreational access to Cache Creek at Rumsey Bridge has been restored! Since the 1930's the public enjoyed access to beautiful Cache Creek via the Rumsey Bridge access point. River users were disappointed and frustrated when in the spring of 2010 public access was illegally blocked.

(Doubleclick on the pictures to see the larger image - use the back button to return.) 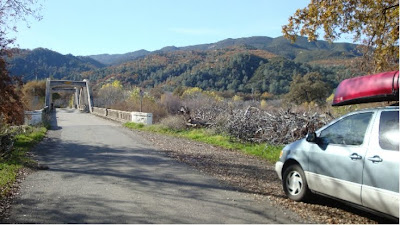 After more than a year of negotiations we were able develop a workable solution with the cooperation of the landowners. Impetus for resolving the easement blockage originated from two concerned paddlers - Shawn O'Brien of Ukiah (myself) and attorney Walter (“Lee”)) Schmelter of Sacramento - but we would not have been successful without the assistance of many others. Several groups and individuals made significant contributions of time and effort to this project, including Yolo County; the California Conservation Corps (which built the access path as a community service project); Senator Mike Thompson's office; Andrew Fulks of Tuleyome; the California State Land Commission; attorney John Holland; and the local residents of Rumsey. All were all pivotal players. 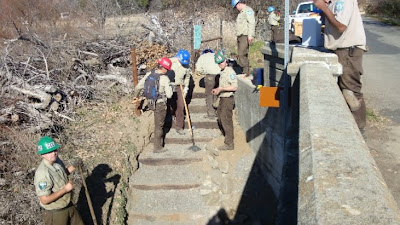 The newly designated path, construction gifted by the California Conservation Corps, is across the river from Rumsey, on river-left, upriver and parallel to the bridge. The landowners agreed to a ten-foot wide path - though the recorded Hwy. 41 easement

extends but three feet on either side of the bridge. One good wide path is a better arrangement for all. Public parking is permitted on the upstream side of the bridge, and is discouraged on the downstream side of bridge. Of course, use discretion when deciding how many vehicles can park along the road. Plentiful and visible parking is available a short walk away at the Rumsey Post Office on Route 16. When putting-in or taking-out please stay within the ten-foot wide path parallel to the bridge, being mindful of private property.

The Bureau of Land Management (“BLM”) donated "Pack it in Pack It Out" signs, which were reworked by Yolo County Maintenance Dept. However, no maintenance of this site is planned by Yolo County. Fellow river-users (as always) are strongly encouraged to help maintain this access point, including trash removal and control of vegetation overgrowth along the existing path while respecting private property. Invasive non-native tamarisk trees are an issue at this site: Historic photos show that without maintenance it took less than six years for tamarisk to completely overtake this site. Many thanks to all the individuals who contributed to this positive outcome by posting our letters, providing historical usage statements and photographs and providing many important contacts we could not easily have made on our own. 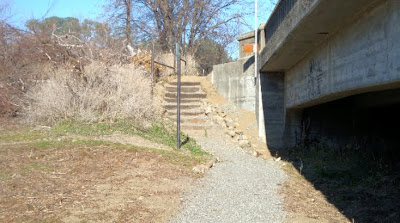