Exploring a "new" section of whitewater river in our kayaks.

BruceH, EricaM, JimH & I drove up to Rattlesnake Bar access on Lake Folsom and met up with DustinH to kayak the Auburn Confluence Run on NF American River (whitewater guide & maps). All of us were making our first runs on this recently reopened section of river. It was a rare treat to get to explore a "new" section of river so close to home. (Placer County / El Dorado County, California, USA). 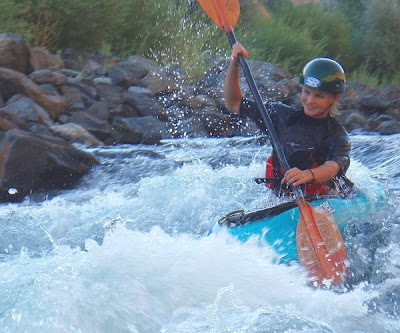 At the end of the summer in our second consecutive drought year, the Rattlesnake Bar boat ramp was much too far from the water to use it as a take-out. So we went down the lake a short ways, drove down into the canyon and parked at a spot where the truck could be just a short walk up the hill from the water.

We went to Sierra Outdoor Center the whitewater boating store in Auburn CA to rent a paddle. Guy, the owner, told us that the flow wouldn't reach put-in at The Confluence of NF & MF American River until ~5 PM. So it didn't seem so bad that we were running a little late for our intended launch time of 3 PM. Eventually we launched at 4 PM at a "fish flow" of ~300cfs. We put-in on NF American River right below the Old Foresthill Road bridge, just a little way upstream from The Confluence. There was some discussion of taking a long break somewhere and waiting for the big release from Oxbow Dam to catch up to us, but fortunately we didn't do that.

The river was runnable at "fish flow," but a little scrapey in just a few places. The rapids were class II at this flow, but we could see places that would undoubtedly become class IIIs when the flow gets higher. In between the rapids the river was really calm, so we needed to do a lot of downstream paddling throughout the run. There were some good playboating spots, but fortunately we didn't spend a lot of time on any of them. 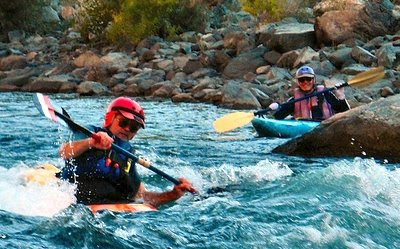 The canyon was really beautiful. We saw river otters and merganzer ducks. There were lots of nice rocky cliffs along the river. Once we got past the Labor Day weekend crowds at put-in it was a quiet and secluded run.

Some construction/destruction was still evident at the old Auburn Dam site. The pumphouse constructed there is painted brown to make it a little less of an eyesore. The local county needs a water diversion and the pumphouse is far more tolerable than the dam would have been.

The artificial rapids at the old Auburn Dam site had no playspots at "fish flow." Just downstream, the Birdsall Access now has some riverside parking spaces.

We stopped for a quick dinner break just upstream from Oregon Bar river access. We never saw any access road to locate Oregon Bar by eye, but Jim got the exact coordinates of the location (N 38.86367 W 121.05621) using his Garmin GPS Map 76S. Copy/paste these coordinates into the find box in the map at Auburn Confluence Run whitewater guide to see our dinner break location on the map.

The water level in Lake Folsom was 387 feet so we got to kayak quite a few rapids that would normally be hidden under the reservoir. Even so, there was quite a bit of lake paddling at the end of the day. We just barely got to take-out at the last twinkle of twilight and on the last bit of our paddling energy. Then we loaded boats in the dark. I have no idea how Dustin found the way out of the canyon on the windy, twisty dirt tracks, but he nailed it perfectly without any backtracking or getting lost in the dark. We got back on the pavement and out past the entrance gate at 8:30, well before the 9 PM closing time.

Our plan to put-in at 3 PM was based on the faulty information that the morning release from Oxbow Dam would reach The Confluence around that time. This needs some rethinking now that we know the main flow doesn't actually reach there until 5 PM. Class II boaters planning to run this section on "fish flow" could launch much earlier in the day and enjoy a leisurely trip without the stress of making it to take-out before dark. Most of the big rapids are right after Birdsall Access, so Oregon Bar looks like a good option for a take-out that would allow a put-in after 5 PM, running on the main flow, and avoiding the lake paddle at the end of the day.

Share |
|
Comments:
Dustin, Erica, Jim, BruceT and a wonderful early fall day made the Auburn Dam run delightful. Certainly a major pleasure of climbing and kayaking are the companions. However, kingfishers, river otters, and others accompanying us on a nice float through grey pine woods and dry chaparral made it a lovely day. Needless to say we had no human company on the run. It is wonderful to have this river back after the decades of the Doolittle debacle. In some ways this was more an Arkansas ‘float trip’ than a California kayak trip, but wonderful none the less. At 300 cfs this is a class II run with some very low water gravel bars. However, the paddling through slow sections, isolation, length, sharp rocks once we were past the serpentine canyon, and messy take out suggest that it is not a good beginner run. At higher flows narrow gorges and boulders that have washed into the river bed suggest that several rapids will be class III.

This is a messy run for timing. In the spring one would not have to wait for the very late dam release. However many of the best rapids were below lake level. A spring run would have a very long flat water paddle at the end with many rapids far below lake level (until there is a clear early take out spot). At this time of year waiting until 5 pm for the late release down the Middle Fork would provide some class III surprises in the dark. Thus it looks like the long days in a narrow window in early August could give a class III run and otherwise enjoying a class II long day in the fall at 300 cfs and forgetting the release are the choices until there are other take outs. Without a 4 wheel drive there will be a very long carry at the take out at Rattlesnake Bar. The fact that the gate is locked at 9 pm should be a caution as well. In the twilight we saw several vehicles with drivers less skilled than Dustin struggling to get out of the deep dust and silt of the dry lake bottom.

I am certainly ready to do this run again starting earlier in the day to have time for a few swims and for enjoying several very nice play spots.

Thanks Jim, Dustin, Erica and Bruce for a wonderful day.

I'm very interested in this run with a little more water.

I was talking to Erika about these old bridge pillars that are usually under water that were close to our take-out location. Bridgemeister - Rattlesnake Bar Suspension Bridge Remnants has a historical photo - Rattle Snake bar bridge 1864. The canyon looked a lot different before it got backed up with Folsom Lake silt.