The Bureau of Reclamation is studying the possibility of raising Shasta Dam by as much as 200 feet. Clearly it won't happen anytime soon, but we need to keep an eye on this one for the future. Taxpayers and environmentalists should consider whether we are doing our utmost to conserve and reuse our current water supply before paying for any giant new water projects.

West Sacramento is finding that its levees need work (Sacramento River, Yolo County, California). They are planning to vote in May on a local tax assessment for levee repairs, similar to the voting currently underway just across the river in Sacramento. "West Sacramento also is considering imposing new developer fees to raise more money for flood improvements."

Its unfortunate that it took the devastation of New Orleans to focus our attention and get more action on the flooding risks elsewhere in the country. Local communities must pay the costs of protecting themselves against flooding through taxes and also through flood insurance for homes and businesses. When all of these costs are considered wouldn't it be smarter to develop homes and businesses on higher land that is not prone to flooding and leave the flood-prone lands for farming, recreation, nature preserves, etc.? Everybody who cares about issues like wise use of taxpayer dollars and preserving free-flowing rivers should pay some attention to this. Realistically we need to protect existing developments against flooding. The local funding contribution for flood control projects should be high; people who get the benefits of developing an area must accept the risks. Zoning regulations should be set to direct future developments onto lands that are less susceptible to flooding. Federal taxpayers should not be expected to provide bailouts for flood control on land that never should have been developed in the first place.

"Rep. Doris Matsui, D-Sacramento, said late Tuesday that the (U.S. Army Corps of Engineers) had completed work on its spending priorities for 2007 and that a record $110 million will be spent on Sacramento-area projects." This will fund a critical part of the work needed to upgrade our local protection against flooding from the Sacramento River, American River and the local creeks. Additional federal funding is still needed to enable the upgrades planned for Folsom Dam.

Folsom Dam Upgrade - Work Underway to Get the Necessary Funding

A congressional panel voted in favor of funding for upgrading of Folsom Dam (American River, Sacramento County, California, USA). Apparently more votes will be needed to finally secure the federal part of the funding for this project. I assume, but have not yet been able to confirm, that the state funding for this project was already approved in Prop 1E or Prop 84 at the last election. The local funding component depends upon voter approval of the SAFCA tax assessment currently underway in Sacramento.

I had no idea how complex this is. If all of the funding from various sources can be worked out, then it is hoped that construction of the project will be completed by 2015. In the meantime, Sacramento will remain the U.S. city most at risk for flooding.

Rep. Dan Lundgren, R-Gold River, now supports restoration of Hetch Hetchy Valley at Yosemite Park (Tuolumne River, California, USA). "A state study last year concluded that the 380,000 acre-foot reservoir could be drained and the valley restored at a cost of between $3 billion and $10 billion." (Hetch Hetchy plan has new ally - reported today in the Sacramento Bee.)

The organization Restore Hetch Hetchy completed a feasibility study in 2005 which revealed "that by diverting water from the Tuolumne River and a tributary (Cherry Creek) into existing pipelines, 95% of the water and 73% of the energy that would be lost if the dam were removed could be retained. Additional measures such as water and energy conservation, raising Don Pedro Dam, and groundwater storage could easily and economically replace the decreased water and energy."

This proposal has scrambled up the normal ordering of supporters vs. opponents for an environmental conservation project. I hope that there is sufficient leadership to get this dam removal and valley restoration project going and enough creativity to figure out how to get the major funding that would be needed to make it happen.

Masa-akiO, KenyaO & I met Don, SherryM and Sharoni at Greenwood and shuttled to Marshall Gold State Park for put-in. See the guide for the C to G Run, El Dorado County, California, USA. Normally Masa-aki kayaks rivers that have angle instead of gradient, so it was a rare treat to kayak with an old friend whose skills have zoomed far past mine. Last time we kayaked C to G Kenya got hammered. Today it was my turn to flail.

This unseasonably warm sunny day was the first boating of the year for me and a few others in the group. There were lots of birds on the river today, including Canada geese, ducks and even a few wild turkeys. The green hills make the canyon especially pretty this time of year.

The river was a delight at 1600 cfs as we eddy-hopped down to Gremlin Hole. Masa-aki & I got in a few surfs at Gremlin before we all headed down to Old Scary Rapid. We ran a variety of left side and right side lines here, all successfully. Despite being out-of-shape and out-of-practice I think I'm finally getting the hang of the Dagger SuperEgo kayak that I was paddling. Now that I've recalibrated my reflexes and expectations I'm smoothly driving the boat in and out of eddies and onto playspots. 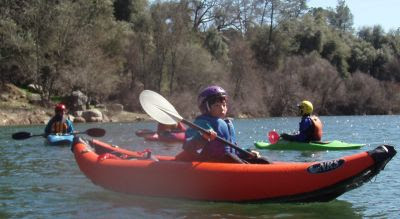 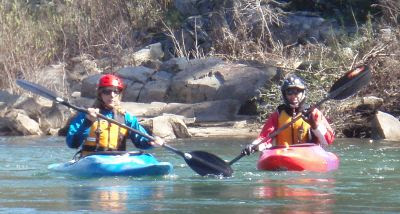 After a quick lunch at Henningson Pk, we ran down to Barking Dog Rapid. Masa-aki & I got in a little surfing there. I got hammered after my first surf. Oh well, sometimes you shred and sometimes you get shredded! After a little rest I got back in there and got a couple more surfs with better outcomes. At this flow Barking Dog is really great for surfing in a short playboat and a difficult challenge for longer boats. How awesome to have a rodeo-quality playspot in the middle of a class II run!! 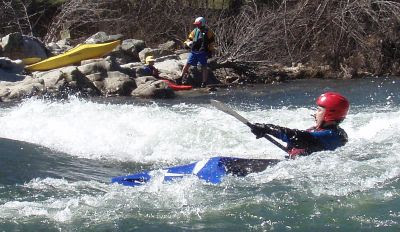 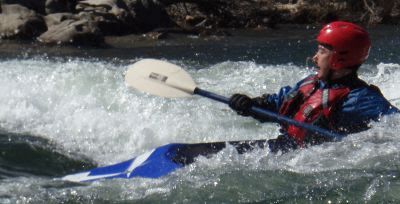 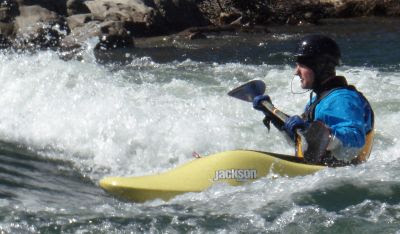 We ran down Current Divider Rapid, Highway Rapid and Swimmers Rapid before taking out at Greenwood Ck. After a little confusion most of us ended up at Yosum's Pizza in Coloma for post-paddle munchies, rehydration and river-talk.