Whitewater winter boating far out in the boondocks of northern California

DonB, DonnaF, BillV, BillJ, SueC, LeeA, MarcusH, JimH & I met at Hendy Woods St Pk at 10 AM. We shuttled up to put-in our kayaks at the Mountain View Road bridge at Rancheria Creek (Mendocino County, California, USA). The inflatable group launched just before us at put-in (raft & 2 IKs). The nearest gauge downstream on the Navarro River reported 700 cfs, but far upstream we were boating on only a fraction of that amount. The creek would still be runnable at even a little lower flow, but that would make it difficult to finish the run before dark on a short winter day. 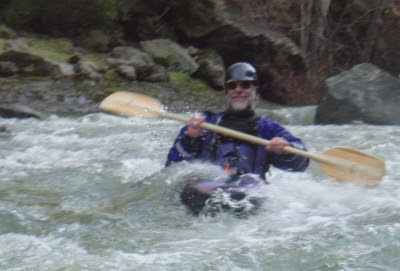 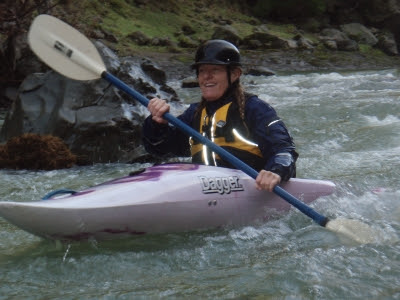 At the first good play spot I got a nice surf, but some torso muscles I hadn't used since my last trip in Sept screamed so loudly at me that I did little or no surfing the rest of the day. Fortunately my forward paddling engine was fine, so I was able to eddy out, take pictures of the group running a rapid, then jet up to the front to look for the next photographer's eddy.

Lots and lots and lots of nice class II rapids are spread throughout the miles and miles and miles of this run. Many were just easy riffles, but there were numerous rocky jumbles where views were a little obstructed and some river reading skills were needed to find the best safe route through the rapids. The big flood of the previous week cleared almost all of the fallen wood out of the creek, but you can't just paddle carelessly down this kind of wilderness creek. The whitewater was definitely class II+ in many places and I'm giving it an extra unofficial "+" because the run is very long, very busy and very isolated.

We had a swimming contest throughout the day. Judges are still tabulating the scores, but there will be many awards given including most swims, most scary swim, most nonchalant swim, etc. Fortunately we were all warm, upright and in our boats by the time we reached take-out.

The spectacular green forest and mossy green coverings on the rocks made it look a lot like some of the rivers I've run in Oregon. There were some tiny ferns and even some Spanish mosses hanging from the tree branches in places. In the sun at put-in it seemed warm, but mile after mile of narrow, deeply shaded canyon and cold splashy water made me really glad to have a drysuit. It was so dark in this steep, narrow canyon that my camera was often firing the flash. I got an unusually large number of blurry pictures because long exposures were needed in the low light, while subjects and photographer were moving too fast and bouncing around too much.

Especially in the later part of the day we did a lot of paddling downstream to ensure that we got to takeout before dark. We passed the inflatable group late in the day when they were taking a rest stop. The canyon widened out and then we paddled under the footbridge and the Ray's Road vehicle bridge. With my paddling engine running on empty I'm sure I wasn't the only one who dreamed that we could take-out there. Once we realized that we would get to take-out just before dark we started wondering if the inflatables would be paddling out in the darkness. Fortunately they got to take-out just at dusk with not a moment to spare!!

Waiting in the dark and the cold for our shuttle drivers to return I was lucky to have borrowed a coat & hat from JimH to supplement my inadequate take-out clothes. Note to myself (Hey, its January you goofus and you're up in the mountains!!).

We stopped for some great food and even greater beer at Anderson Valley Brewing Company in beautiful downtown Boonville CA. Their stout beer was especially great, but with a long drive to get home it had to be one small one and then out of there. I got home before 11 and slept like a log. Today I'm nowhere near as sore as I expected to be, but it was great to warm up in the hottub this morning and stretch out the kinks in a few stiff, sore spots. Thanks to DonB for organizing such an outstanding whitewater river trip!!

Share |
|
Comments:
These are great pictures - you both look so happy! I am an ocean kayaker myself (did a great river trip a few years ago back in South Africa) but reading about your trips makes me very keen to try out some rivers in the near future. Thanks for the great blog.