After a wild storm on Friday that knocked out power many places around northern California the weather report said that two more storms would follow immediately. Unfortunately the second and third storms fizzled, so the anticipated giant flows never materialized. The big flows of Friday night had dropped back down by Sunday, but there was still a little flow remaining from the Friday storm.

On Sunday JimH, SueS and I went first to the Napa River at Yountville and decided that it was probably runnable at the 850 cfs that we saw, but too narrow and brushy to be interesting. It seems clear that the river is no more than class II whitewater, but the strainer hazards are definitely class III.

After phoning home to get some more flow info from the Internet we decided to go to Cache Creek (Yolo County, California, USA). Cache Creek was running at 650 cfs which is towards the bottom of the runnable range. Bear Creek was too low to run at 130 cfs, but with a little more water it might get into the lowest end of its runnable range. Maybe it will need at least 300 cfs to float down without too much boat abuse, scraping and/or hiking. 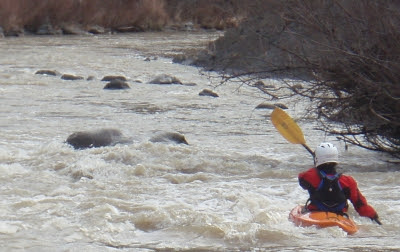 More photos from the trip at Picasa Web Albums.

Once we got to Cache Creek I realized I had some gear issues, so I put on the rabbit ears for the rest of the day. While Jim & Sue ran the river I drove upstream along Bear Creek (Colusa County, California, USA). I road scouted the 4 miles of Bear Creek north of Hwy 20. It is a beautiful V-shaped canyon with a pretty clean wide-open river channel and very little brush along the river. With no snowpack or reservoirs upstream this creek flows only during & after the winter and spring rainstorms, but these apparently are frequent enough to keep the brush flushed out of the canyon. Hopefully we can catch a runnable flow and boat it one of these days. It looked like it would be a great class II run when it has some more flow. From the steel girder bridge put-in at the Wilbur Springs Road there are 5 miles of Bear Creek down to take-out at Cowboy Camp. Then there is a new river access point just downstream from the second bridge on Bear Creek, so boaters who don't want to run the 3 big Ursa rapids can put-in below them and run the last section of Bear Creek down to its confluence with Cache Creek. Then I drove back downstream and took some pictures at Mother Rapid on Cache Creek. Just as I was driving away I saw Jim & Sue coming down river, so I raced back in time to get some photos of them from high up on the Hwy 16 bridge as they ran the rapid.

Hopefully Jim & Sue will make some comments on the boating part of the day.

Special thanks to Sue's husband for the flow report that helped us decide to go to Cache Creek after we decided to not paddle the Napa River, and to Bruce for driving shuttle. The flow on Cache Creek was 650 cfs at 1400 and 600 cfs at 1600. Bear Creek was 130 to 140 cfs and dropping 10 to 15 cfs per hour. Sue and I did find several very nice surf waves, and one great ender spot at this flow. The very muddy water made it impossible to see rocks, so we hit quite a few.