Whitewater kayaking is a great way to spend a sunny winter day in California.

Will, MelodyS & I carpooled to meet up with JohnS, Tobias, BrentD, & UrsS at Salmon Falls. It was neat to also run into ScottA & ChuckS who I'd last seen on the river a hundred years ago, maybe longer. We shuttled a lady from another group up to put-in at Greenwood River Access, but the mileage hogs in our group decided to go up to Lotus & park at the bakery. DawnD joined us there to put-in just below the Hwy49 bridge on river-right. (Parking there is OK on Sundays when the bakery is not open for business.)

The Gorge Run on SF American River had 4 hours of peak flow ranging from 1600 to almost 1800 cfs (El Dorado County, California, USA). The river was not being turned off completely overnight, but it was turned down and the daily peak flow of 4 hours was still clearly visible in the hydrograph from the last few days. 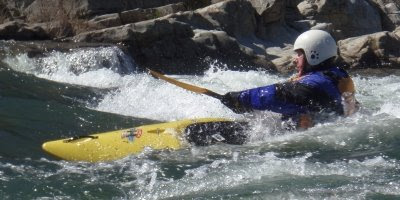 UrsS got some good rides at Barking Dog Rapid!

We had an upset at Barking Dog Rapid and many rescue boaters went downstream in pursuit. So just a few of us were left to do just a little surfing at Barking Dog before heading downstream. We enjoyed the sunshine, the clear air and the rare downstream winds through the long class II section of the run. It would have been a great day to take even more pictures, but my partially charged camera battery ran out at Highway Rapid. I had noticed some poppies blooming along the road down in Sacramento, but spring flowers were not yet blooming at the slightly higher elevations along the river. Pairs of geese were honking at each other at many places along the river. I guess they were competing for nesting sites. We had a quick lunch on river-left a little ways upstream from Fowler's Rock Rapid.

Despite our high level of boating experience and the great familiarity of our group with the GorgeRun in particular, some of us were focusing intently on making good runs at Satans Cesspool Rapid. I remembered getting tossed around there two trips ago and was determined not to let that happen again. I planned to run it on the fly like I did successfully on the last trip, but my entry line didn't feel right so I made a last minute decision to eddy out on the left and reset. Then I peeled out, ran a perfect line along the top of the curling wave and got through without even getting splashed. We had one more upset at Bouncing Rock Rapid, but this one had a quick happy ending. At Hospital Bar Rapid I followed MelodyS and Will on a semi-sneak route. We entered left to miss the big wave then immediately back to the center to avoid the rocks sticking out on river-left. Despite my great line at Satan's I got no points for technical merit on today's run due to the foolish emergency bracing that got me through in some places at the end of the day when my energy reserves were running low. Got to get my fitness back up to a decent level!!

Lake Folsom was at a level of 391 feet so we again could enjoy the last whoop-de-doo of whitewater after Surprise Rapid and float the river current all the way to take-out at Salmon Falls.

Thanks again to JohnS for organizing a great group on a great day for kayaking on a great whitewater river!!

Share |
|
Comments:
Funny you didn't see poppies blooming on the Gorge section--up on the Chili Bar run they were blooming everywhere. The entire hillside was covered in orange.

We saw a crazy display between two geese above Current Divider. They had each other with their beaks by the neck, and were wacking each other with their wings. First one wing at a time, and then double wing wacks! Feathers were flying everywhere, one of the geese gave up and the other pursued it across the river and continued to harass it untill it was limp, floating in an eddy. After a slow float to the top of the eddy motionless, it did get out of the water and looked OK. Two males fighting for a mate, or one protecting a nest (there was another goose onlooking the whole thing, honking away) or could it have been a male and female mating?

Great combat rolls Will! Even if I didn't get to surf barking dog, it was worth it to see you hit your Grand-ready roll in squirly water!