Whitewater river kayaking on a sunny summer day in California.

DonB, DonnaF, BillJ, SueC and I went up to SF American River and put-in at Greenwood River Access. The Gorge Run on SF American River (guide & map) was running at 1600 cfs (El Dorado County, California, USA). Sue had a Mamba kayak demo boat from The River Store and Donna was paddling her new Mamba kayak (The Mamba Sisterhood !!). During the first part of the run we were dodging rafts more often than not. After a leisurely lunch in the shade at Composting Toilet #2 scenic rest stop (N 38.79381 W 120.98211) most of the rafts had gone by and we had an uncrowded run through The Gorge the rest of the day. 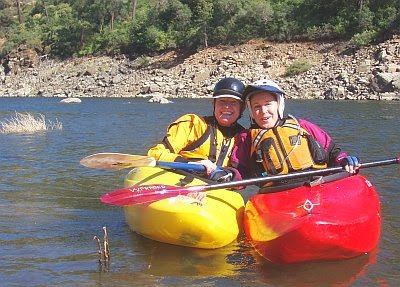 Whitewater river running - with or without your kayak!!

We got lots of roll, swim and rescue practice in The Gorge. After eddying out on river-left and running my intended line at Satan's Cesspool Rapid (N 38.80607 W 120.97675) I got pushed up on the rocks below the rapid on river-right. When the river started pushing me over I decided not to bash my paddle on the rocks to stay up. I haven't needed to do many combat rolls lately and I haven't done enough (any!) practice rolls either, so I wasn't super confident about my roll technique. After tipping over my instincts kicked in, my set-up position felt great and I popped up smiling and happy.

I got to tow a swimmer to shore below Bouncing Rock Rapid. The loops on my Frankenstein kayak are not real easy for swimmers to grab, so I'm going to make some equipment adjustments before the next trip. More about that in a later post. It was an easy, no stress, no problem swim and rescue, but it did take longer than necessary to get to shore. I was a little rusty on my communication with my swimmer, so I will discuss how I need to tighten that up in a future post.

Lake Folsom was at a level of 429 feet. We paddled the last sets of class II+ whitewater rapids after Surprise Rapid, but then we had a short stretch of reservoir to paddle before reaching Salmon Falls take-out.

On the way home we stopped at the Round Table Pizza in El Dorado Hills (El Dorado County, California USA). We ordered two giant pizzas, more than we could possibly finish, and then proceeded to finish them.

Thanks to Bill & Sue for a big bag of really great cherries! I'm always glad to help solve your "problem" with that excessively productive cherry tree!

Share |
|
Comments:
It was my first time kayaking the Gorge! Thanks to all for helping me with the routes through the rapids. It is a great boost to my confidence that I had such a good day. Although I was disappointed that missed my roll at Bouncing Rock, it was good to exit sucessfully out of a new boat. The swim was a bit long but actually enjoyable once I was able to hang on to Bruce's boat. It was a fun enjoyable day. I really appreciate the patience and guidance of Bruce, Bill, Don and Donna.
WHAT A CHERRY OF A DAY!