KimF, CarolynD, EricaM, JimH & I drove up to China Bar and met up with DustinH, SueM, WillD, JoeG & Eddy to kayak the Auburn Confluence Run on NF American River (river guide with map). We joined MelodyS, Brian, Marion and unexpectedly picked up John at put-in at The Confluence. The flow started to come up and we headed downstream a little before 5 PM. (Placer County / El Dorado County, California, USA). 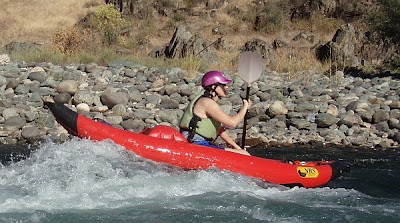 It was interesting to compare this trip to last weekend's run at lower flow. This week all of the rapids and playspots were a little more dynamic and there were no shallow spots where we had to scrape over the gravel bars. The calm spots between the rapids were still pretty slow, so we did a fair bit of downstream paddling. Apparently we were kayaking ahead of the main flow because when we stopped for a while at the Artificial Rapids the flow came up considerably. The left channel had very little flow just like last week, but two pretty fierce hydraulics formed in the right channel. As the flow came up the upper wave-hole went from a good-looking playboating spot to a pretty fierce stopper wave that I had to punch pretty hard when I kayaked through it. The second hydraulic on the right was also pretty powerful, but there I was able to run a sneak route on the left and avoid the need to punch it. 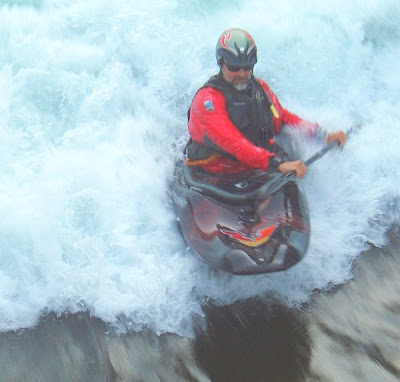 Downstream from there we had one swimmer and a pretty nasty broach on a mid-stream rock. When I heard somebody say that we had a swimmer I shifted my attention far downstream attempting to see if my help was needed. Then I hit a submerged rock, didn't react to it strongly enough and suddenly I was broached hard on a mid-stream rock. I was stuck there long enough to give everybody a scare. Pretty quickly it became clear that with the rock sticking deep into my cockpit I wasn't going to flush off of there easily. Eventually I was able to push myself up and then slide off the rock to the left. Whew!!!

It was starting to get dark as we reached Oregon Bar take-out. The hike up the hill with our gear was pretty strenuous, and then the drivers had to hike even farther up to where the shuttle cars were parked. Just like last week we were loading boats in the dark ~8 PM and got out the entrance gate at 8:30, just 1/2 hr before the gate was locked.

This run is deceptively challenging. The whitewater at the flow we saw was no more than class III-, but with limited daylight, flow that doesn't come up until late and an entrance gate that gets locked at 9 PM there is not a big margin for error. With a lot of very experienced boaters in the group we made it fine, but just barely.

French fries "animal style" at the In 'N Out Burger in Davis was a great way to finish the day.

I once again had a blast, good to see you guys again and weet all the new folks, It was nice to have some water this time. The water in the pump diversion channel looked a little scary, but it was one of the straightest rapids I've been through. If any one wants to run this in the future beware of crazy lady at party beach on the air mattress, she'll get your shirt.