Whitewater on the American River never fails to delight.

BillJ & I carpooled up to Salmon Falls to meet up with JohnS, AlbertA, MartinH, KeithF, KevinB, LindaK, RaoulA, & UrsS. We kayaked the Gorge Run on South Fork American River (El Dorado County, California, USA). The "ultimate shuttle van" was able to carry all of our people, kayaks & gear up to put-in at Henningson County Park. After a week of rainy weather that was making some giant flows on some other rivers and creeks in California, the SF American River was still "turned off" overnight and had only the standard few hours of 1500 cfs release for the day. We had a great day of cloudy weather with occasional sunshine and a forecast for more storms in the coming week. 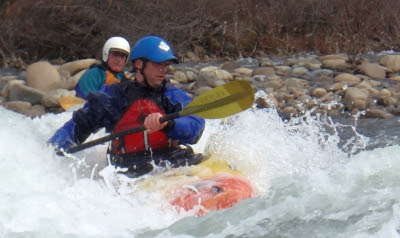 Albert was carving it up big time on the whitewater at Barking Dog Rapid!

We stopped for lots of kayak surfing at Barking Dog Rapid and various other places along the way. Then we had a quick lunch on a nice sandy beach a little ways upstream of Fowlers Rock Rapid. The sparkling clean cold water made my bare hands a little cold in the first part of the day, but I put on a warmer hat at lunch and my hands were fine for the rest of the day.

The Gorge is a whitewater playground.

It looked to me like everybody had an easy fun day kayaking through the big rapids. We had no swims and few if any flip-overs, but in a group so large I didn't see everybody run every rapid. At Satans Cesspool Rapid I tried the rafter's line of running it on the fly instead of catching the eddy on the left as I have always done in the past. I drifted in on the line between the current and the eddy and then when I saw the face of the big curling wave I just powered in and punched it! I took pretty conservative lines through most of the other big rapids. At Hospital Bar Rapid I was following pretty closely behind AlbertA and saw him get tossed pretty high as he was punching it right down the gut. By then it was too late to switch to a finesse line so I punched it too and we both came through just fine. No matter how many times I have kayaked this run there is always something new to explore.

The last stretch of whitewater after Surprise Rapid provided a great finish to a very great day of whitewater paddle boating. I don't know if its due to last years drought or the construction underway at Folsom Dam, but it was also very nice to have the reservoir level down so low that we had river current to carry our kayaks all the way to take-out at Salmon Falls Bridge. Lake Folsom was at a level of 380 feet.

Bill & I stopped for dinner at Thai Style Dining in Cameron Park, CA. The brown rice was great, the green curry was excellent and the ?? seafood special was spectacular!

Thanks to JohnS for organizing such a great whitewater river kayaking trip!!

Share |
|
Comments:
Bruce, It was great to meet you. Nice writing and pictures! I'm inspired to get my camera out next time I'm on the river.

That's great! If I'm taking pictures of others its nice if there is another camera around to take a picture of me now an then.

Hey Bruce, it was great boating with you. You have a really sweet setup here with all the pictures and writeups.
MartinH