Whitewater, wildflowers & a windy spring day on the river in California.

BillJ, SueC & I resisted the urge to make the easier, shorter drive to the SF American River and made the great choice to kayak the Shirttail Run on NF American River (guide & map) (Placer County, California, USA). 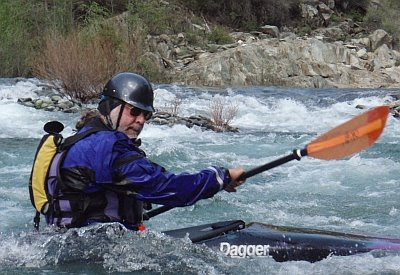 BillJ at a surf spot below Surf City.

A mellow whitewater flow, but still lots of fun spots to play in the river.

Poppies, lupines, redbuds and other wildflowers blooming along the road made the shuttle drive very scenic. Getting to put-in around noon we had to drive quite a ways past put-in before we found a place to park and have lunch before putting on the river.

The flow was quite a bit lower than the 1100 cfs that Bill & I had on our previous trip on this run. Most places along the run were less dynamic at this flow. The big rapid that splits around the island was runnable on both sides of the island. The boat-eating hole that normally lurks at the bottom of this rapid was not there, but we could see the rock that creates the hole when the flows are higher. Down the river a ways the diagonal ledge was especially mellow, making it a good spot for novice surfers. Later we passed under the high-tension wires and went on to Surf City Rapid. I got a momentary surf on the big wave there, but lost it quickly. We took a break for "second lunch" at Surf City and then continued down the river. Bill & I surfed a little on the spot below Surf City. Then we ran a few more rapids and surfed at the wave next to the rusty metal bridge wreckage. Just below there the boat-eating hole was as fierce as ever.

We made it to take-out by ~4PM. The gauge is quite a ways down the river, so I estimate that the white water flow we boated on all day passed the gauge at ~7PM (850 cfs.)

We had a great dinner at The Burrito Shop in Auburn California to recharge after a most excellent day of kayaking!!

Share |
|
Comments:
The road to the take out was bursting with spring wild flowers. The sun was bright and warm. The wind and water were cool. A beautiful day to be on the water. Being my first time on the North Fork, I was anxious, but the rapids were readable, the wave trains fun, lots of eddy hopping and surfing waves. A great wilderness run! Looking forward to doing it again.
Sue CJ

Yes, I've always had lots of fun on Shirttail. Some time when the flow is higher I'd like to extend the run down to the take-out at the top of Lake Clementine.