Fewer, bigger rapids made a contrast from the the day before.

Despite the tough day on Saturday we all woke up and broke camp pretty efficiently and went to Mt Shasta city for a nice breakfast in a little cafe. Then we drove down to Redding and west to the Trinity River.

After the previous day's adventure of rock scraping it was hard to believe that a "big river" like the Trinity would be runnable at 450 cfs, but commercial rafts were launching so we knew that there would be enough flow for our kayaks. I had run this river a couple of times many years ago, but my recollections of the run were few. It turns out that in this pool-and-drop section of river the rapids form at constrictions in the riverbed, so 450 cfs and some gradient can make some pretty punchy rapids. On the other hand, with a strong upstream wind all day the long pools probably added up to as much flatwater paddling as we had done the day before on the reservoir.

The runs we kayaked this trip on the McCloud and Trinity Rivers were really different from each other in a multitude of ways. The Trinity was lower in elevation with madrone and oak trees along the shore. The road was right by the river the entire way, offering a multitude of possible put-ins and take-outs. The Trinity had warmer water, total sun, little or no shade and warm breezes. With fewer, more powerful rapids we found ourselves scouting quite a bit. Eddies at the bottoms of the rapids on the Trinity made good places for photography. We found some really nice large and small surfing spots on the Trinity, but there were very few of them on the McCloud.

Hell Hole Rapid was a great whoop-de-do !! We had some good runs there and a few flubs. I drifted in slowly on a pretty good line, but a little to the right of my plan. At the big final drop I penciled straight in and slammed really hard on a rock at the bottom. It took a little too long to flush out and I was running out of air when the water still felt too chaotic to make a roll so I bailed. It was an easy swim to pull my boat and paddle into the eddy. I was lucky to get away with just a souvenir flat spot on the bow end of my boat. Gotta do better there next time !! One strong paddle stroke to launch me off the lip of the final drop might have improved my outcome, and I will definitely run a line farther left in the future. 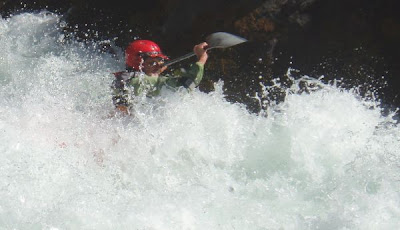 By the time we finished all of that photography, scouting, surfing, and river running it was getting late by the time we got off the river, so we dashed back to Redding and got there just before the daylight ran out. PaulG & I made a quick dinner stop for fast food, then got on the highway and made it home by about midnight.

Share |
|
Comments:
We saw an adult bald eagle too.

i did have so much fun on the mccloud & trinity trip - thanks for putting this together. turned out both of my shoulders popped out with my accidental fall while scouting on the trinty and lots of other things hurt as well. going down tanaya canyon the next weekend at yosemite may not have helped. rappeling with arms that do not work is a trick. anyway i can almost raise my left arm now so should be back to boating badly soon.
bruce h