A glorious warm sunny morning in the high country

We awoke to a serenade of birds chirping and bullfrogs croaking. The road in front of the resort offered inspiring views of Mt Shasta in the morning sunlight. After a leisurely breakfast we broke camp, shuttled a vehicle to takeout and then drove to put-in.

We went to the Upper Run on the McCloud River (Siskiyou County, California, USA). Check out my Upper Run McCloud whitewater guide. The river was flowing at 775 cfs (data from Dreamflows), but this is measured at the bottom of the run. Springs gushing out of the canyon wall add significant flow to the river, so the plan was to put-in downstream at a medium sized spring where we had put-in sometimes in the past. From there on down we expected enough flow to run the river. Four of us had been on this section river before at a range of springtime flows. We knew where the tough spots would be and we expected the whitewater might even be easier at a lower flow in summertime. The plan for Saturday was to have an easy warmup day to get ready for a tougher run on Sunday. Midsummer in a drought year we knew that there wouldn't be enough water to run Lower Falls on the McCloud River or the steep mile of whitewater river just below it.

We stopped at the falls for the view and a group photo. We continued south down the dirt road and found that a new river access point had been build since the last time any of us had been there. Guessing that we were pretty close to our intended put-in we decided to launch our kayaks there.

Well, we weren't close enough to the first spring! There was only enough flow for our boats to scrape and bump through rocky rapids spaced about every 50 feet in a pretty steep riverbed. There was a lot of serious boat and paddle abuse and quite a bit of pushing off the rocks with our hands in places where there wasn't enough water to maneuver with our paddles. It was tricky, challenging, strenuous and slow going, but we all got through it fine. Fortunately, we didn't crack or bend any of the long kayaks in our elderly fleet of boats (2 Crossfires, 2 Frankensteins, Kendo, Jive and a new inflatable kayak).

Once we got to the first springs I was greatly relieved as we took our break, but there were still a few more scrapey rapids for a while downstream of there. The flow was much better after we passed the second springs, but it was still very strenuous, technical whitewater boating. JimH did a masterful job of leading the group down good routes, but everybody had to be on guard at all times because the river continued to be a minefield of shallow fang rocks hidden in the dark waters of this narrow river deep in the shade of a tall, lush green forest. I think that everybody had a few extreme moments of getting broached on rocks, but most of these incidents were resolved pretty quickly and easily. 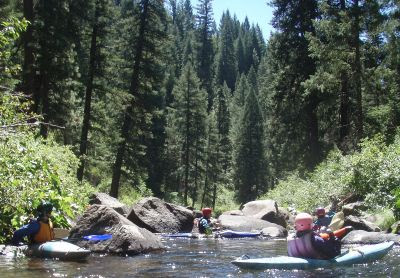 We had our lunch break at Big Springs, where a giant gush of water pours out of the canyon wall. This is the last legal stopping spot before entering a long section of private property on both sides of the river. The steep section of whitewater just below Big Springs was more challenging than I had ever seen it. It was a chaotic mess of holes, seams and tricky crosscurrents just lined up one after the other with no recovery time in between. We had one swimmer here who made it through but ended up cold and shivering. Fortunately we were able to get him into the sun, strip off some wet gear, put on some extra gear from drybags, feed him some chocolate and get him back into paddling condition before too long.

The three miles of continuous class II below this steep section was not as white as I have seen it in the springtime, but it continued to be far more difficult to kayak at this flow. Fang rocks were everywhere in the dark shaded waters. While constantly watching the water I hope everybody had some time to look up and see the big picture of the incredibly beautiful forest through which we were kayaking and the perfect crystal clarity of the water wherever there was enough light to see into the water. I had another big sigh of relief when we got to the bridge, because everybody had made it through the toughest part of the whitewater in pretty good shape.

At Fish Creek it is helpful for everybody to "willingly suspend disbelief" while floating past the Hearst family's incredible collection of fancy cottages and castles. We stopped on a beach at the top of the reservoir to warm up in the sun, get a bite to eat and readjust clothing for the paddle down the reservoir. I just relaxed, got into a good paddling rhythm and chugged my way for the three miles across the reservoir to take-out at Tarantula Gulch boat ramp. MasaO did a heroic job of paddling his son's inflatable kayak while towing the plastic kayak that he had paddled in the whitewater section.

It turned out to be a much, much longer and harder day than we were expecting, but that only added to the feeling of success at the end. We had dinner at the lodge in McCloud, but I was still pretty much a zombie even after food, fluids and some rest. I was really happy to go back to Friday's R.V. resort and crash for another night.

Share |
|
Comments:
A great job. This blogger has it together. We enjoyed having this group at our place. A very accurate report on the McCloud River.

We saw at least one osprey, and several nests in the tops of snags that were probably osprey nests.