JimH, PaulG & I went up to the Gorge Run on South Fork American River (El Dorado County, California, USA). The river was flowing at 1600 cfs. Lake Folsom was at a level of 409 feet, so we knew we would have current flowing all the way to take-out. Parking was pretty full around take-out, but we eventually got lucky and got a parking spot at the lot downstream of Salmon Falls bridge. This provided a rare opportunity to photograph the riverbed downstream of the bridge in an area normally covered by the reservoir, including the ruins of the fish ladder that previously enabled salmon to migrate upstream past Salmon Falls rapid.

As we ran the river I did the photography and Jim took gps data for some of the river landmarks that we needed to identify on the topo map. Here is my whitewater guide for the Gorge Run.

Dodging the unbroken line of rafts while running the river

We put-in at Greenwood Creek a little after noon. The flow was already up, a mass of rafts were coming from upstream and even more rafts were coming from the parking lot at Greenwood. The first part of the day we dodged rafts, and did a little surfing and eddy catching. Wild blackberries were ripe and we spent some time picking ones we could reach from our boats. Our lunch stop was at composting toilet #2, just a bit upstream from Fowler's Rapid. By the time we finished lunch most of the rafts were gone and the river was pretty uncrowded for the rest of our day. 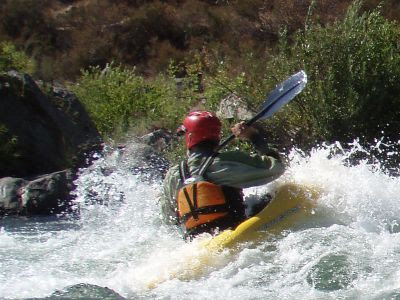 Here are more pictures from today's run and also Jim's photos from the trip.

Whitewater Big Time in The Gorge !!

We all had great runs at Fowler's Rapid, Upper Haystack Canyon and Lost Hat Rapid. At Satan's Cesspool Rapid Jim made it look easy, running precisely right down the top of the twisting, curling wave in the middle of the rapid. Paul went quite a bit to the left of Jim's line and had a wild whitewater ride. I was tossed around last time I ran Satan's, so I set up very carefully and ended up running a little to the right of Jim's line. That kept me out of the hole, but delivered me into a boiling eddy on river-right. After a few emergency braces I got out of there in pretty good form. Son of Satan's Rapid and Hospital Bar Rapid did a little bit of smackdown on us today. We also had a little bumperboats incident at Scissors Rapid, but no harm, no foul, no problem. I've always enjoyed the class II+ section after Surprise Rapid as a time to make a few last moves and reflect on the end of a great day of whitewater.

It was especially great to float past the normal take-out at Salmon Falls Bridge and run Salmon Falls Rapid for my first time. Silted in with reservoir gunk this is now a class II- rapid that wouldn't block any salmon migration, so it would be interesting to flush out the gravel and see what this rapid looked like before the reservoir was built. The long walk up the hill from the river bottom up to the parking lot was not so great, but it was interesting to see the river bottom in a section that is normally drowned by the reservoir.

Jim & I then drove up to the Caples Lake area up to 8300 ft elevation, camped out on a tarp in a meadow at Schneider Cow Camp (enter coordinates N 38.72496 W 120.05018 into Find box at Acme Mapper). We had a good view of the sky and watched the Perseid Meteor Shower. At this high elevation we had a dark sky far from city lights, really clean air and brisk, cool temperatures. After my miscalculation on the recent McCloud River trip I was really glad to spend the night nice and warm with some additional warm gear in reserve. Jim is a fountain of knowledge about astronomy. Waking up intermittently throughout the night, it was really interesting to see the stars progress across the sky. We saw some man-made satellites and quite a few meteors, some very bright and others more faint.

Share |
|
Comments:
good day. conditions were great nad apparently the flows were nice. challenging river for me, and gotten humbled throughout the run, but survived it, running some holes that were of a new strenth to me. enjoyed the pontification examining the matrix surrounding urgency and importance, and may take that to heart. felt like i was working on skills, and when asked if i'd taken any classes, i proclaimed, "what do you think this is!" so needless to say, it really helps as a beginner to run rivers with experienced paddlers. also ran into some folks from ETC Trips and heard of their mission; may get involved in that organization when i become more comfortable in the boat, which happens every time i get in it.

bit of a side note-- i have a plastic paddle that has is in two pieces with a tightener that connects the two sides. when i inadvertantly let go of my paddle (slight panic move) at satan's cesspool, apparently my paddle was barely buoyant as water can get into the seam. this made it tougher to chase down. needless to say, it was really helpful to again be paddling with experienced paddlers who were able to pick up some of my gear at my garage sale. other fun drops on the run. next time i'll jump into a few more of the waves along the run.