Whitewater in the river and in the clouds made a fun and beautiful day!!

I met JimH and OliverH in Winters Ca at 10:30 and we got deli sandwiches for lunch at Lorenzo's Market. Then we had a nice Sunday drive through the country taking the scenic route to put-in. Driving through the agricultural fields we crossed over the canal of water diverted from the river downstream of the whitewater section. Lets give thanks to the farmers. Their irrigation water contracts explain why we have higher than normal flows in Cache Creek this summer despite the drought year. For more information see "The art of moving water."

We went to the Rumsey Run on Cache Creek (Yolo County, California, USA). See my whitewater guide for the Rumsey Run. The creek was flowing at 775 cfs based on the estimate at Dreamflows.

Oliver was giving the new red inflatable kayak its first trial run on the river, while Jim & I were paddling playboats (EasyG 60 and SuperEgo kayaks). We found quite a few nice surfing spots and had a blast carving them up!! 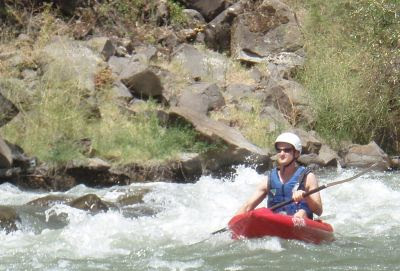 Having lunch downstream of County Park #2 we met Mike and his gang of kayakers making their first run on Cache Creek. Our leisurely late departure did get us on the river after the commercial boaters were mostly gone, so the river was remarkably uncrowded through the afternoon.

The weather front that had passed through the night before brought crisp, clear air and some very interesting clouds, so it was a really great day for photography. A tall grass was making big feathery flowers along the shore in many places.

We tried running a new line at Mother Rapid. Driving by on shuttle (and when taking pictures there 2 weeks ago) I saw that we could enter on the left and diagonal across the rapid to finish on the right. Jim found a pretty good line through there, but I got bounced around a little. Once I had to start dodging rocks it became more exciting than I planned as missing one thing resulted in bouncing off something else. I eventually got over to finish on far right but it wasn't easy or graceful.

On the way home we got to Guinda, CA too late for our traditional popsicle at the corner store. Ibarra's Mexican Restaurant in Guinda, CA was open, so we stopped there and got some excellent tacos and burritos.