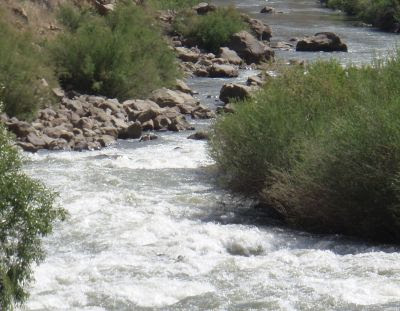 Waves, holes and hidden rocks provide an exciting entry into Mother Rapid. Out of sight at the bottom of the rapid the left and middle of the channel are a boulder sieve, so it is important to finish the rapid on the far-right side of the channel.

More pictures from this California whitewater river trip. Pictures were taken by BruceT and BruceH with an Olympus 720SW waterproof camera.

Share |
|
Comments:
I cannot think of a bad kayak trip so it is no surprise that the first run of June was wonderful. It was not exactly a wilderness experience, but on a summer weekend that is a little much to hope for. The highlights were that I forgot my spray skirt. It was a disappointment since 900 cfs (600 from dam + 300 from Clear Lake) made for some really nice surfing waves that I hated to miss, but I still learned a lot. For example DO not back surf with a low volume stern and no spray skirt. Finding the green water at that high flow level was a challenge. BruceT and CarolynD were very kind to wait as I emptied the water after every other ripple. I borrowed BruceT’s skirt for one drop below the low water bridge.

The highlights also included screams about a bald eagle at lunch. It turned out that the ‘eagle’ was a crow who stole a sandwich from a family on the beach. The run was culture shock after 4 or 5 trips on Cache Creek this spring where if we saw anyone, they were people we knew. This time multiple companies had masses of rafts and baloney boats from multiple put-ins. There were lots of people having a really good time, a few who were quite taken back, and several who clearly would never get near a river again. I think the company had not anticipated the high flow.

The plan on Mother (Row Boat Rapid) was that I would leave my boat at the top, walk it, take a few photos, and pick up a spray skirt at the bottoms. As I went down the shore I stopped to watch a guy about 1/3rd of the way down trying to get a raft off a rock in mid stream. He kept trying to pull the boat over on top of him up stream which looked like a sure way to die. The raft finally worked lose, he hopped on board and was soon pinned again in a boulder sieve 2/3rd s of the way down. A fellow was setting on the shore watching and commented that this idiot should have drowned. He added that he had spent quite a while watching the two person baloney boats come down and 4 out of 5 lost their occupants in the hole at the bottom, and not a single one so far had hit a good line. The spectator turned out to be our friend BobL, enjoying the carnage from commercial trips. Then CarolynD and BruceT came down both on the same absolutely perfect line. One could have been fooled into thinking they were good boaters. The big hole at the bottom was largely washed out, but the higher waves went from bouncies to real stoppers as British boaters would say.

BobL had spent part of the day surfing, and loaned me his spray skirt which made the remainder of the run more fun but not much of a challenge. I did 5 or 6 rolls at the bottom of Mother to make up for several hours without a skirt and found that I had wound myself in fishing line like a grass hopper in a spider web. The river below Mother was filled with loose paddles, the shore lined with disgruntled clients minus their boat, and more than one raft wrapped around a rock. Just below the rapid I found a nice dry bag and tried to return it to multiple groups on shore who claimed it was not theirs. At the end of the run I gave it to CarolynD to see if she could find the owner. She opened it to find several items of clothing, some junk food and some Altoids. However the Altoid container turned out to be a healthy stash. One wonders if some of the carnage was due as much to the beer and pot as due to the lack of skill. A perfect day was capped with a popsicle at a local store. The fields in Capay valley are different every day and never less than beautiful.