Ho Hum, back on SF American River again, WOW what a difference a little outfitting makes !!

Hubert, BruceH & I drove up to Coloma and put-in at 11AM on C to G Run SF American River (map & guide) (El Dorado County, California, USA). The best air quality of the summer made the scenery really great. After paddling the SuperEgo kayak tugboat for many trips without any outfitting I finally got around to putting some foam into the bow to make a bulkhead that my feet could push against while paddling. What a difference that made!! Its still a tugboat, but with outfitting the boat spins better, its faster on a straight line, and its much steadier and more predictable when eddying out. 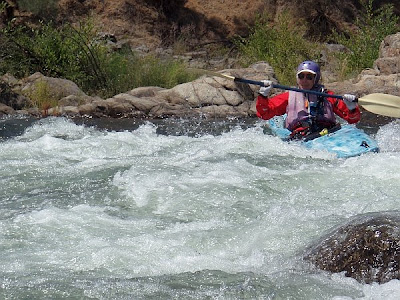 Playboating on every little wave & hole we could find.

We were playboating to the max on all the little waves and holes we could find. At first we thought the flow was a little different than normal to make the playspots a little easier, but when I got home the flow data said the flow was the same old 1600 cfs that we have had on most SFA trips this summer. Maybe we are just getting enough boating time this summer to get in shape and in practice to achieve more and better playboating.

No ticket required to watch the freestyle playboating rodeo at Barking Dog.

There were some really great playboaters at Barking Dog, so we eddied out and enjoyed the show for a while. The videos that I shot from river-left were a little bit too far from the action, but hopefully good enough to show some great moves by some great playboaters.

We saw a raft wrapped on a mid-stream rock at Highway Rapid. That provided bit more adventure than they were expecting. At first I thought that raft would be stuck there until the flow dropped down at the end of the day, but they got lucky and they and their raft got to take-out just a little while after we did.

No wonder we keep coming back to kayak on SF American River!

There aren't that many other places to go kayaking around here in a drought year summer, but every time I talk to Bruce about kayaking it seems he has kayaked on Cache Creek at least three or four times the previous week. (How come I haven't been on any of those trips?) So he's always willing to go anywhere but it seems that we always end up going to SF American River.

After the briefest token discussion of some alternatives we quickly decided on dinner at Thai Style Dining in Cameron Park, CA. The sweet&sour stir fry, green curry & brown rice were really great. Medium spicing on the green curry was tasty, but still pretty mild. I know I'm not acclimated enough to survive really hot spicing, but next time I'll have to make sure to let them know that we are really serious about medium spicing. The fried banana and mango ice cream dessert was really wonderful. We spent some time previewing the pictures on my camera. Despite our long, hard day on the river and leisurely dinner we ended up driving home again in the glare of the setting sun, maybe due to our early put-in time.

I guess if I ever want to go kayaking on Cache Creek I'm going to have to find a great Thai restaurant in Capay Valley!!

Share |
|
Comments:
It sounds like I need to take BruceT on Casche Creek. It is nice during the week, but the weekend of rafts and beer cans I find a turn off. On Wednesday I put my hand on a shore rock to seady myself in the shade to find a small coiled rattle snake next to it. We reached a truce and studied each other while RobK got in his boat across the river.

Sunday on the S fork was wonderful. Nothing special, the usual nice people, cute ducks, breath taking chaparral, and nice play spots. Watching the world class boaters at Barking Dog rather put the rest of us in perspective. They were a pleasure to watch.

What we really need to do is start earlier and play until dark as we did a few years ago. The problem is not the start time, it is being old and out of shape (but still on the river). Thanks for a nice day BruceT. Hubert enjoyed it as well.

Cache Creek is really quite fine on the weekends. The crowds of rafts & IKs all launch in the morning, so they are easily avoided via an afternoon put-in time. Unlike MF & SF American River that get only a few hours of dam release in the morning, Cache Creek flows continuously both day & night. Thus, there is no risk of flows dropping down below boatable levels at the end of the day.