California whitewater paddleboating - spring-like flows in June - how great is that!

KimF, BruceH, TedD & I decided to kayak all the way to take-out at the top of Lake Clementine on the NF American River Shirttail Run (guide & map) (Placer County, California, USA). After some confusion about which fork of the river we were running we finally got our shuttle cars together. Thank goodness for cell phones! The road to take-out at Upper Lake Clementine on river-left is shorter and in much better condition than the Ponderosa Way Road on river-right. Then we drove back to Auburn, CA and ran a normal shuttle on river-right via Yankee Jim's Road to put-in. Another group ran their shuttle entirely on river-left. They said that side of Yankee Jim's Road is in terrible condition, so they didn't recommend doing the shuttle that way even if it is shorter.

Once we got on the river we immediately had some carnage and some rescue practice. Fortunately we all got it together in time for Rapid 3 1/2, although the one who unexpectedly found the sneak route to the extreme right of the boat-eating hole on river-right gave the rest of us a big scare.

Click on the photo to see a larger version; use the back button to return. 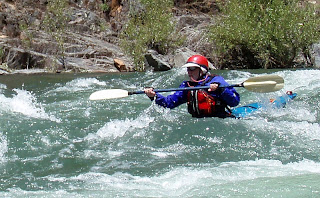 Kim did some great surfing at Surf City. This time I was able to witness a bit of it, but couldn't get stabilized in an eddy sufficiently to get any photographic proof. We had lunch and reapplied sunscreen just a little ways downstream from Surf City. The narrow section of river had some good waves, but there were routes to hit the waves or miss them wherever needed. We all missed the next big hole, but again I couldn't get stabilized in time to get any pictures of our group boating past it.

It was a real treat to kayak past the Ponderosa Way bridge where I had always taken out when running this section of river in the past. This lower section of river does not have a lot of whitewater, but there is one more boat-eating hole. Salsa Rojo is a scarey ledge hole that is almost river-wide. Some of us ran a narrow channel on river-right that bypasses the hole. Those who run the main channel need to be very vigilant to sneak past the hole on river-right. Bushes that have grown up along the river channel in the past 3 drought years obscure the view of the hole until you are very close to it (almost in it!!). This lower section of river is also quite pristine and beautiful because there are no roads or structures built in the canyon.

We reached take-out at ~3:30 PM and our flow of 1640 cfs reached the gauge just downstream shortly thereafter. 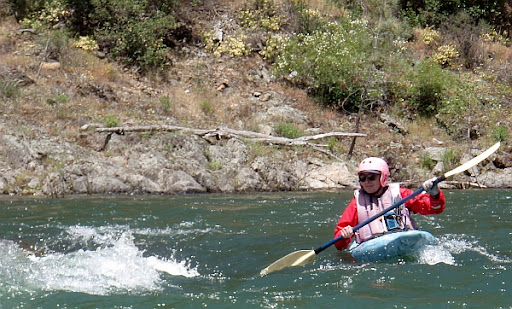 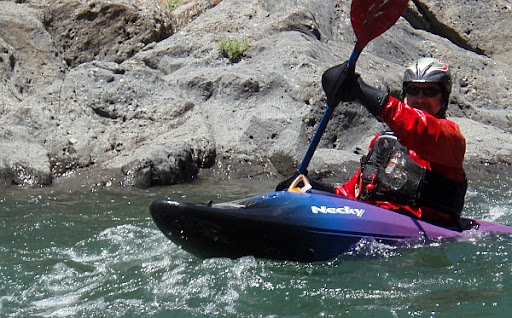 On the way home our shuttle vehicles scattered again. Those who missed the rendezvous missed some really great beef & veggie burgers at Ikeda's in Auburn, CA.

Share |
|
Comments:
First a thanks to KimF and BThomas for going with TedD and me. Ted is in the Kansas brown water kayaking club and has rare attempts to paddle white water. I had been nervous watching Dream flows head toward dry, jump back to 6000 cfs and then start dropping again. I was by no means certain if a hot day would flood the canyon or we would run out of water. However, it was a pretty day and the third N. Fork run of the year.
We got the swims over early in white water but there was some worry about the ledge hole that ate Abby again below the Island and ‘Poor Dear Abby Rapid.’ Ted decided to walk it but at the last minute took a sharp left into the drop and narrowly missed the hole by going river right. At the bottom the question was ‘what hole?’
The river was still cold and grey with silt and snow melt, but still lovely with the river left to a hand full of boaters who all seemed to know each other. Farewell to spring and monkey flowers were still in bloom along the banks of a very mellow stream with a few surprises. The fact that one driver got lost both going and coming was entirely the new old car that did not know they way.
Ted come back soon. There are lots more rivers than NF, Moke, McCloud, and Trinity. BruceH

It is always an adventure, sometimes more than others !!