We did lots of warmup and training on the rapids leading down to Gremlin Wave-Hole and got all of the trainees squared away to survive & enjoy the rest of the day. We did lots of surfing and no swimming at Gremlin. There was an epic battle at Old Scarey Rapid, multiple roll attempts just barely short of successful, then a swim, but ending up with loads of credit for true grit and determination. We had lunch on the beach at Henningson Park. 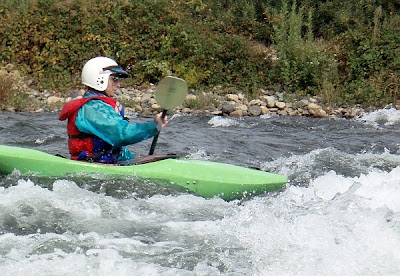 Playboating on the little wave upstream from Camp Lotus was great as always. Everybody tried, but results were highly variable. No matter how tiny it looks it takes some skill to get a good ride on this one! 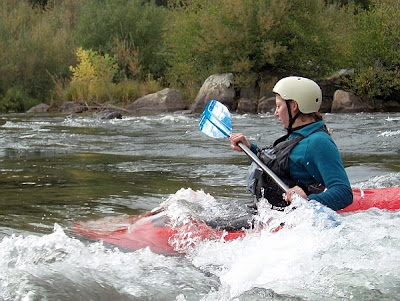 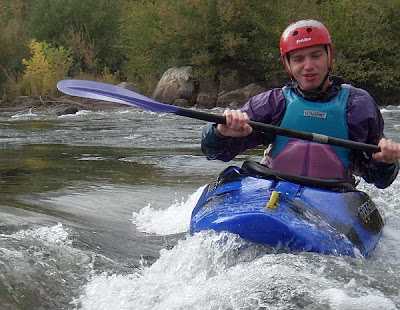 Alex at the playboating spot upstream from Camp Lotus.

We stopped & enjoyed the playboating exhibition in progress at Barking Dog Wave-Hole. By the time we left there the flow was dropping. We had two minor upsets above Current Divider Rapid, but got it back together and ran the rapid OK. Then we cruised on out on Highway Rapid and Swimmer's Rapid. 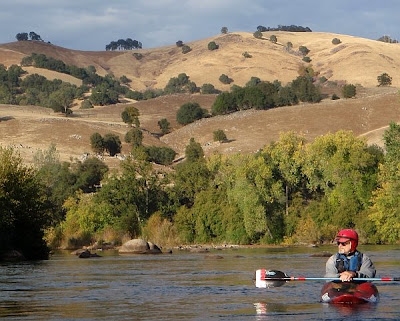 We stopped for pizza & a beer at Yosum's in Coloma. It was just warm enough to enjoy sitting outside on the patio. But it got dark awful early, so sooner or later we are going to have to admit that summer is over.

Lots of awards are needed in recognition of such a stellar day of kayaking!! The King Salmon Award for frequent swimming was hotly contested, but by the end of the day the winner was clear. The Busy Baker Award was given for making the most rolls (attempts & successes). An Honorary Degree in Geology was awarded for studying the rocks up close and personal so often throughout the day. And Honorable Mention for members of our group who very briefly entered the playboating contest at Barking Dog Rapid - better luck next time!

Share |
|
Comments:
At Yosum's we enjoyed an interesting, although, naturally, a bit unsettling, discussion of California water rights.

Yea, California needs to make some big changes in our water systems. There are some big conservation vs. development fights coming up in the next few years.

Thanks to JoelH and BruceT for setting up a wonderful trip on a beautiful cloudy fall day. Gremlin was a surprise, usually it is hard to stay on, but today it was hard to climb out of. I was blown away by the tenacity or Alex, Sonya, and Kevin in being game and coming up smiling on a cold day. They took way too much instruction with good graces as well. For a first time boater to try 6 rolls in one rapid must be a record - that is so impressive Sonya - I would have been out of that boat. It was really impressive for Kevin to manage to get in a hard eddie without trying (or maybe without knowing what an eddie is. It was a wonderful day made more fun and interesting by great companions.