* The power on/off button is tiny. This could be a problem for boaters who wear gloves.

* The 3x zoom is good for getting a little closer to the action, but still enables sharp pictures to be taken, even from a boat that is getting bounced around in the river.

* The big, bright viewscreen is very nice, but in sunny conditions on the river it is sometimes hard to see exactly what will be in the picture.

* The camera is small enough to fit nicely slipped inside my pfd when not in use, but large enough to allow hurried, one-hand operation on the river without worrying about getting a stray finger in front of the lens.

* The sturdy lens cover automatically closes to keep water off of the lens when the Olympus 720SW waterproof camera is not being used.

* My 1GB xD memory card can hold 294 pictures at the highest quality setting.

* The special battery lasts through a day of photography, but extra batteries and/or a method for recharging in the field would be needed for longer trips.

* A special cord is needed to download pictures from the camera to the computer, but no special software is required.

* The 7 megapixel resolution that the Olympus 720SW waterproof camera captures in each photo is enough to allow a nice small picture to be cropped out of a larger picture.

* The pictures benefit from sharpening with photo editing software, especially when cropping a small piece from a larger photo.

More about:
• Reviews - Equipment for Whitewater Kayaking.
• Photog tutorials - are you serious about photography? - BRT Insights.

Springtime is a great time for whitewater river kayaking in California

CarolynD's parrot Mabel supervised the loading of our boats & other gear. Then we drove up to Marshall Gold State Park to meet the rest of the group. Check out my guide for the C to G Run (El Dorado County, California, USA).

MichelleV, Steve, Mira, Troy, Linda, Barbara, Candace, Tanya, CarolynD & I joined up for an old timer's boating day. There were lots of experienced kayakers in the group who were just kicking back and enjoying a fabulous spring day of kayaking on a sparkling great flow of 1600 cfs. We saw many families of geese and some families of ducks cruising the river with their offspring.

I caught a few waves on the way down to Gremlin wave. Gremin was in its usual snarly mood, yielding long rides only to skilled kayak surfers and quickly rejecting all others. Old Scary rapid is not so scary anymore, especially for a group of kayakers who all have eddy-hopped down much harder rivers. We had a quick lunch at Henningson Park, then did a little more surfing on the way down to Barking Dog rapid. After two brief dips into Barking Dog I decided that the wave was too big and too fast for me on this day, so I retired to the eddy and took pictures of the others. After a handful of kayaking trips with this Olympus 720SW camera I think I'm finally getting comfortable with camera operation on the river. 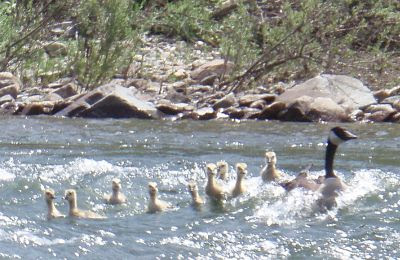 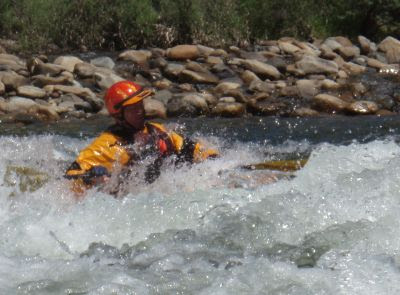 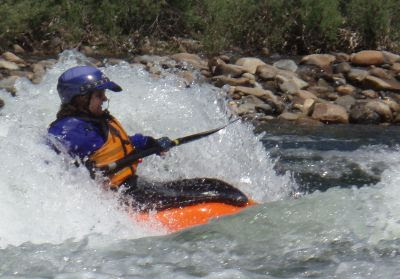 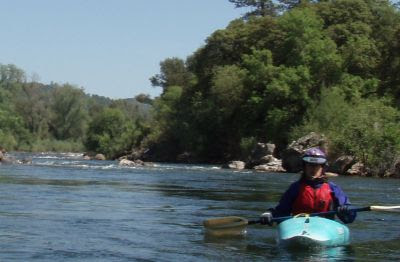 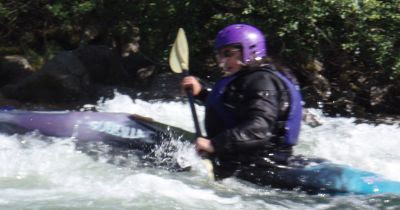 Additional pictures of this whitewater river trip.
Pictures were taken with an Olympus 720SW waterproof camera.

Through the afternoon we were like an accordian - sometimes drifting apart into small groups, then occasionally grouping back together. There were quite a few other boaters on the river, but it never felt crowded. We got a nice rhythm going on down the river. Run a little whitewater, catch an eddy, surf a little or chat with the eddy-flowers, then run a little more. There was a series of good surfing waves at Swimmers Rapid. I was glad to get a few good surfs and then I eddied out to take more pictures.

Picnic after kayaking - what a great idea !!

We had a potluck picnic barbecue at Marshall Gold State Park. There was great food, great talk, and it was nice to eat and rehydrate before making the drive back home.

Fortunately the Aquatic Appreciation Day holiday fell on Monday May 7 this time, so of course we decided to celebrate by getting out and kayaking on the river. BruceH, CarolynD & I liked it so much on last weekend's trip that we recruited BobL and KimF and then went right back to the Shirttail Run on NF American River (Placer County, California, United States). There is no telling how much longer this free-flowing river will have runnable flows in this drought year, so we decided to enjoy it while we could. We'd have to drive a long way to find another river with such clean, cold, beautiful whitewater !!

Unfortunately the road to the Upper Lake Clementine take-out was locked (maybe its only open on weekend days?). Parking was wide open at the usual Ponderosa Way take-out and Yankee Jim's Road put-in. Drive-by scouting of Carolyn's nemesis, Rapid 3 1/2, from high up on the shuttle road showed that the right side channel was still runnable. We didn't see any other boaters on the river all day, but we did see a few setting shuttle to run the section upstream from us.

I kayaked in BobL's Dagger SuperEgo playboat, BruceH boated his Dagger Crossfire, Carolyn had her trusty Dagger RPM, BobL was in his Wave Sport Z kayak and KimF kayaked in a Wave Sport Easy G kayak. Three flat-bottom kayaks and two displacement hull kayaks made up a diverse fleet.

At 850cfs (vs. the 1200 cfs we ran last weekend) it was interesting to see how some sections of whitewater mellowed out while others were the same or possibly even greater in wave action. And with two big-time surfers added to the group there was a whole lot more playboating being done this time. KimF demonstrated his mastery of the sternsquirt, while BobL and KimF were the spinmeisters. 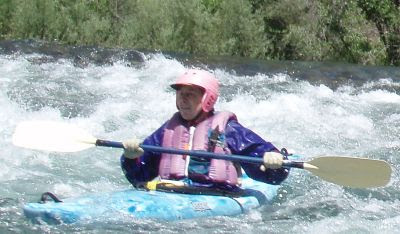 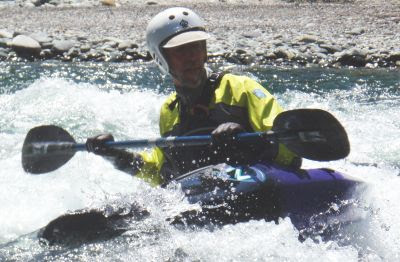 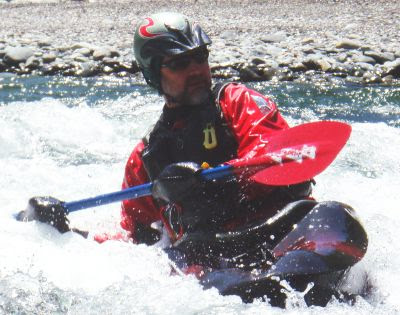 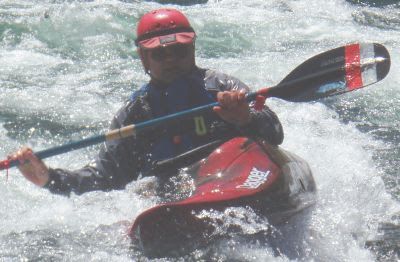 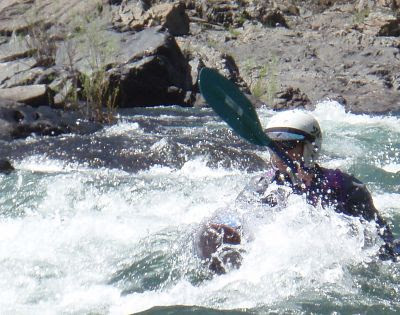 Spring wildflowers were still going strong. We saw more "red-headed eagles" along the road to put-in this time. Maybe they are not so rare after all. We saw a river otter!! We also saw a pair of merganzers with their chicks. I don't know if I've ever seen a male merganzer before. I just assumed that males and females of that species looked alike, but apparently males go off on their own most of the year when we are seeing only the female merganzers along the rivers.

BruceH & I stopped at The Burrito Shop in Auburn CA for dinner on the way home. My Thai burrito was spicy hot with a touch of sweetness. Mmm, mmm, good !!

Living in the Moment on the River

A river is a dynamic and ever-changing place. Kayaking down a river reveals a multitude of delightful things to explore, both large and small. Traveling safely down the river requires choosing a good route for one's own boat and watching out for the safety of other boaters in the group. River canyons also provide beautiful scenery, wildlife and geology to appreciate. We are humbled by the power of the river and the immensity of the canyon. We are fascinated by the ways the water flows in the rocky riverbed, by the glimmer of the sunlight on the water and by the wildflowers and wild animals that we see along the way. Mental and physical challenges are waiting everywhere we look in the river canyon, or we can just relax and enjoy the water, sunshine and fresh air. With so many great things all around us it is easy to fully engage our minds and bodies in the here and now on a river trip. Focusing on the present moment while on the river gives us a refreshing break from everyday issues elsewhere in our lives. And hopefully the happy glow lasts into the workweek until its time to start planning the next river trip !!