After all the rain of the previous week it seemed like a perfect day to kayak the Wilderness Run on Cache Creek and visit the bald eagles that overwinter there. As soon as the rain stopped the creek flows dropped rapidly because drought-depleted reservoirs upstream were not releasing much water. By the time we were driving to Cache Creek on Saturday morning the only part of the creek with boatable flows was the good old Rumsey Run, but we couldn't even paddle that because Hwy 16 was closed due to a mudslide. During rainy weather be sure to check road conditions before driving to put-in!!!

Fortunately BillJ, SueCJ, DonnaF, KateA, JimH & I had made an early start, so there was plenty of time to switch to the Coloma to Greenwood Run on SF American River (map & guide) (El Dorado County, California, USA) at a really nice flow of 1375 cfs. Kate rented a LiquidLogic Biscuit kayak at The River Store in Lotus, CA. Marshall Gold Discovery State Historic Park was closed, so we parked our shuttle vehicle just north of the park at a wide spot along Hwy 49 and put-in at the normal spot. Muscles that I hadn't used for months were barking at me at the start of the run, but they eventually calmed down and I had a pretty good day of kayaking. We did some kayak surfing at Gremlin wave-hole, ran Old Scarey Rapid and played our way down to Henningson Park. Two cold kayakers took out at Henningson Park and the rest of us went on down the river. 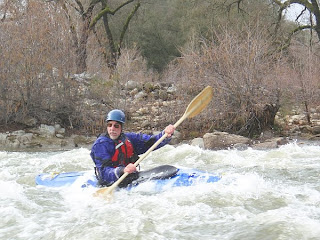 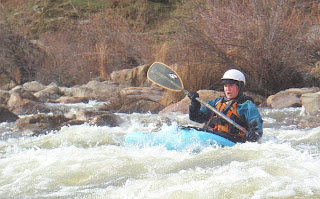 We found no crowds of kayakers at Barking Dog Rapid, so it was a treat to do some surfing there with little or no waiting lines. We met Sage Donnelly and were impressed with her surfing skills. 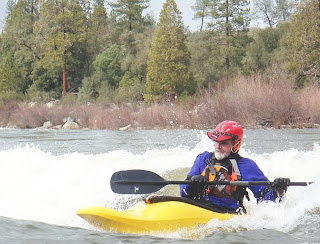 Just below Barking Dog the eddy sharks gobbled up an unwary kayaker. A valiant series of roll attempts on a knarly eddy line were all unsuccessful, so we got some practice salvaging the wreckage. The rest of the run was pretty mellow, with some eddying and some surfing along the way. There was a giant log blocking the right channel at the top of Highway Rapid. Boaters don't normally go that way so it is not much of a hazard in its present position.

My Hydration Fruit-Ade home made sports drink flavor of the day in the recipe was V8 Splash Berry Blend, one of my favorites. I did remember to drink occasionally while kayaking. I didn't finish drinking the first quart until just before take-out, so for me it was another day of kayaking in a state of dehydration. I drank another quart of Hydration Fruit-Ade at takeout, but I've got to train myself to drink more before and during the kayaking trip!!

Parking was really difficult at Greenwood Creek River Access, but with ALL parking spaces available the shuttle drivers eventually made their decisions & picked out the spaces that they liked the best. At the end of the day the place was filled up (not!) with bums and smelly kayakers. Oops, that was us! Having great kayaking friends is important, and even better when we bring great take-out munchies.

On the way home we stopped for dinner and Kate's birthday party at Chantara Thai Cuisine, El Dorado Hills, CA (see photos). The food, the atmosphere and the service were all quite excellent. I'm sure we'll be returning there often!!

Share |
|
Comments:
Although I got abit cold while paddling, It was a good day to be with boating friends and sharing a good meal.

I was comfortable as long as I kept moving. I wore more clothes than usual. Kokotat dry suit, with 2 layers on bottom, light Capeline and medium polypro, and three on top, light Capeline, light Smartwool, and medium polypro. I wore a thin pair of neoprene booties on my feet, and two thin layers on my head. I was warm enough to feel like doing a few stern squirts and rolls.